What’s this about an antique cabinet?

We are proud owners of the below piece of tailoring heritage, in the form of an antique cabinet.  Spotted at an antiques fair in Newark, Lincolnshire, there was no doubt that it would make a fine and appropriate addition to our London workshop, and we were very lucky to find it in such exquisite condition.  However, this wasn’t the first time we had come across the name, and it inspired us to do a little research on the origin of the piece, and the company that commissioned these cabinets and wardrobes, Chas Baker & Co.  This led us on a journey to explore not just the history of the Chas Baker & Co stores, but also to contemplate the evolution of mens fashions during the 17th to 19th Centuries. 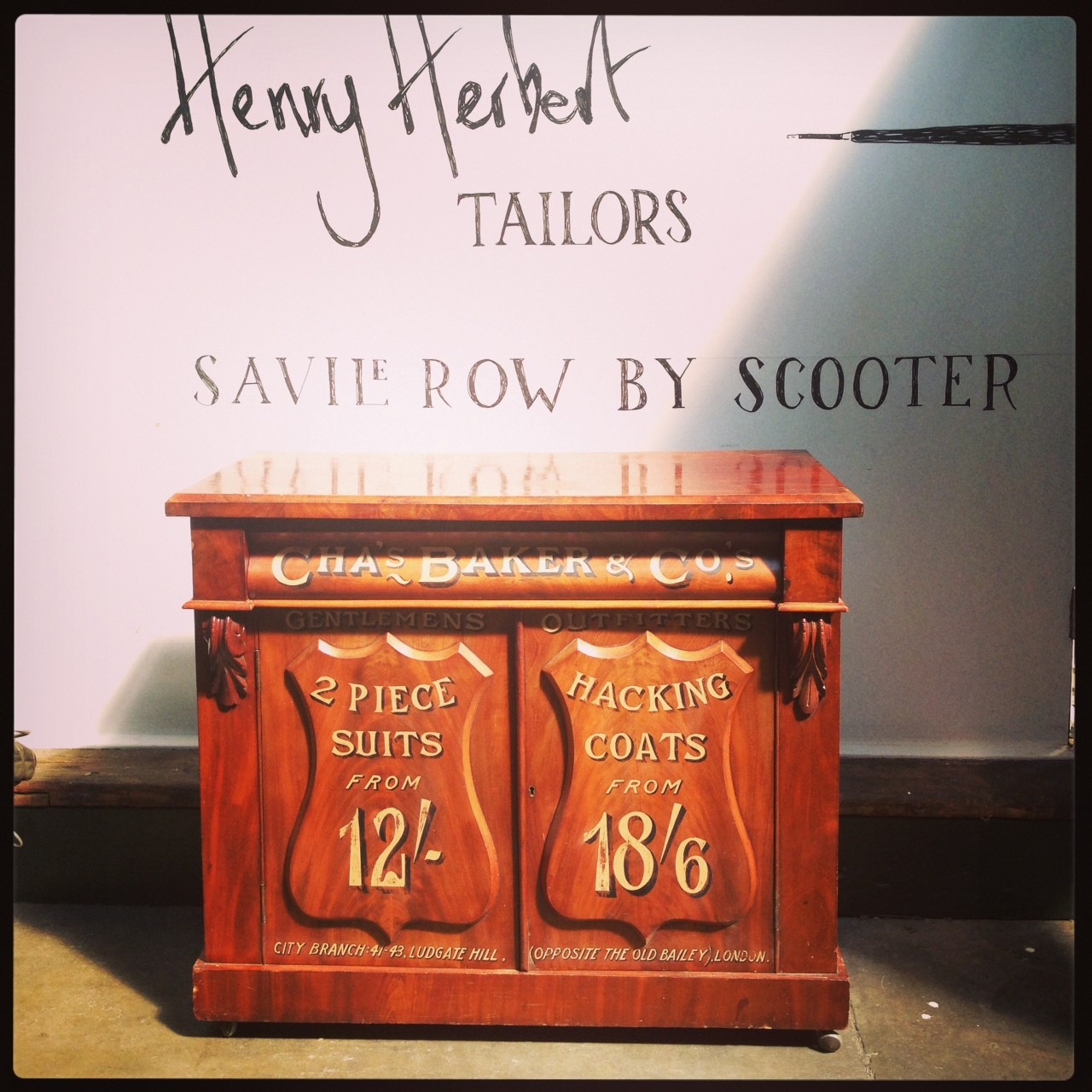 We first spotted a wardrobe at the Town Hall Hotel and were struck by the familiar name – Charles Baker & Co, Gentlemens Outfitters.  You may wonder where you have heard the name Charles Baker – well, it is not too dissimilar to Henry Herbert‘s very own founder, Charles Baker-Collingwood. We have often wondered if it was fate, or co-incidence that led us to acquiring this particular piece of furniture.

Their entry in the 1913 “Whitaker’s Red Book of Commerce or Who’s Who in Business” describes  Chas Baker & Co as specialists in men’s tailoring.  The British Library was a fantastic source and we managed to locate a number of advertisements, as it were, dating from around the 1800s on their online archives.  Colourful illustrated leaflets were used to encourage customers to Chas Baker & Co stores.  The British Library notes that fashions changed significantly from the 17th to 19th centuries, starting with brighter suit colours (greens and reds).  By the mid 19th century this had evolved to the greys, blues, browns and blacks that are perhaps more familiar to us today.  At the same time, new sporting activities such as cycling, fishing and boating were impractical in the starched shirts and highly formal attire of the 18th Century – and so lighter clothing that permitted more movement like soft collared shirts and short jackets, became increasingly popular and were sold at stores like Chas Baker & Co.

We particularly noted the importance of the waistcoat: “Waistcoats were an essential part of a gentleman’s wardrobe in the 19th century. They were worn to the waist, could be worn with or without a collar and single or double breasted. Materials were usually in contrasting colours from the coat and trousers and usually plain however more formal waistcoats were decorated embroidered patterns.” 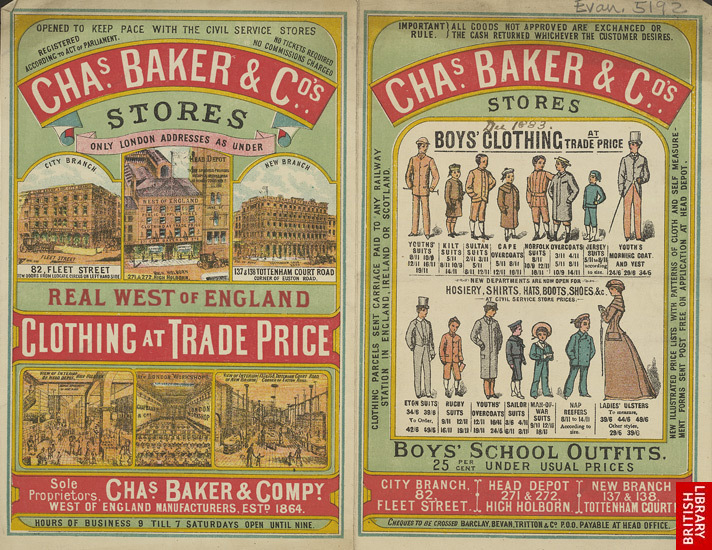 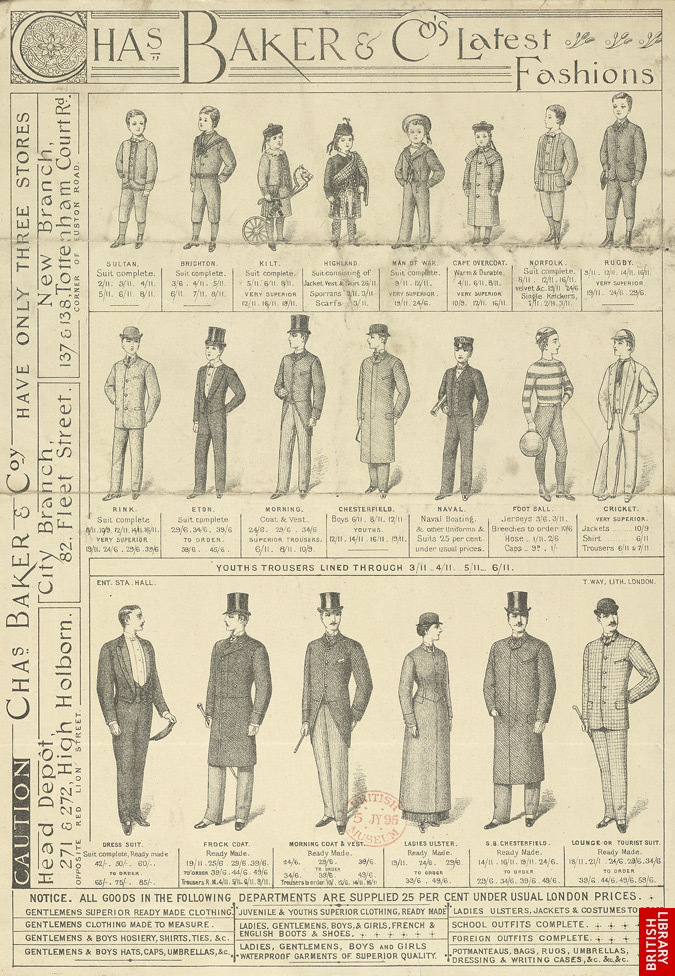 Our little piece of British tailoring history is now firmly installed inside our workshop on Gray’s Inn Road and serves as a daily reminder for us (not to mention a useful, and stylish storage unit).  As the modern gentleman’s outfitters, and bespoke suitmakers, we at Henry Herbert hope uphold the traditions and standards of British tailoring and Savile Row.  I hope you have enjoyed the journey of discovery behind this humble cabinet, and will enjoy its history the next time you are at our workshop. 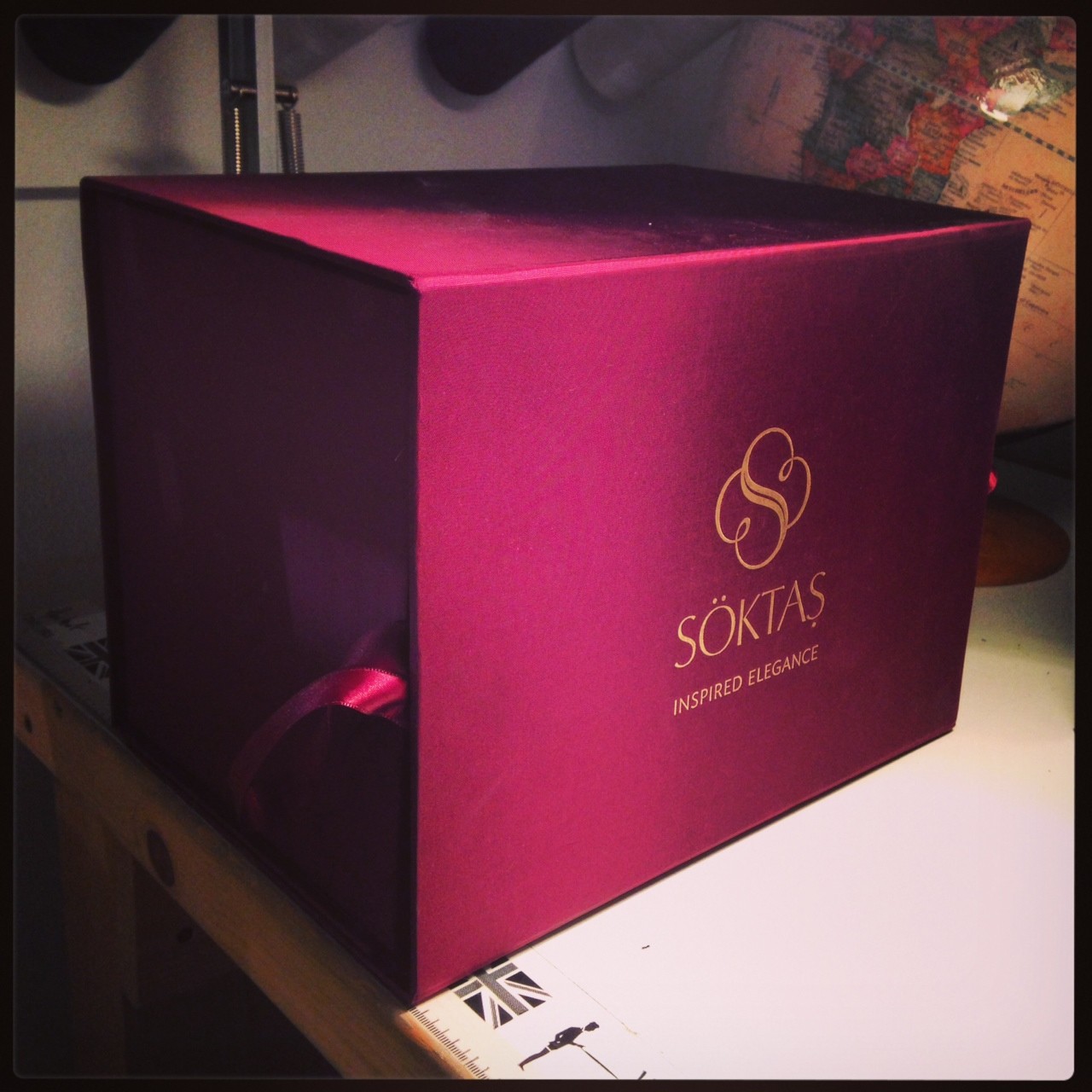 Something old: a piece of British tailoring history - Bespoke Suits By Savile Row Tailors.
Acquiring an antique cabinet from the 1800s inspires an exploration of the history of Chas Baker & Co stores, and evolution of men's fashions during the period